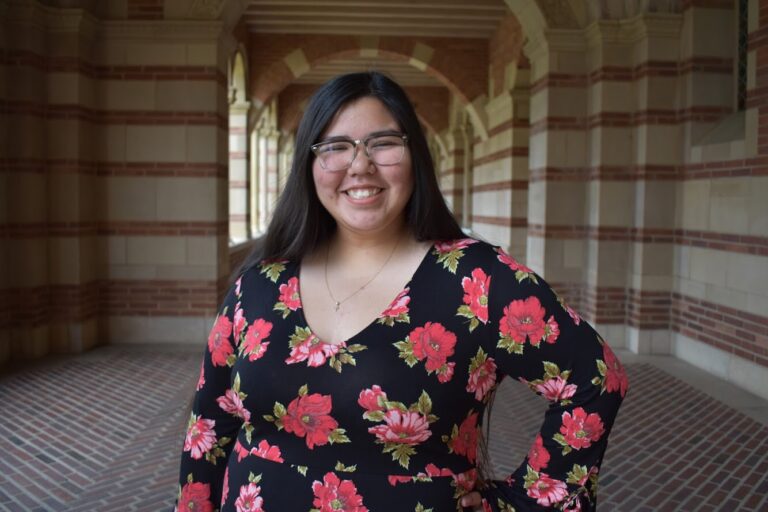 This October we are highlighting Native Bruin Cheyenne Suzukawa (Oglala Lakota), class of 2021
Cheyenne Suzukawa is a UCLA graduate who earned a BA in American Indian Studies in 2021. Cheyenne, who is Oglala Lakota, is currently working as a Realty Assistant at the Pacific Regional Office of the Bureau of Indian Affairs. Born and raised in Los Angeles, getting accepted into UCLA was a dream come true for her. Cheyenne had a busy start to her freshman year; she participated in several rehearsals a week as a tuba player for the UCLA Bruin Marching Band and was heavily involved in the American Indian Student Association, even traveling to Standing Rock in solidarity with the tribe after less than a month into the Fall Quarter. In the midst of all that, a seventeen-year-old Cheyenne was hired by the Publications Unit of the American Indian Studies Center as the Publications Assistant for her work-study. She was taken under Pamela Grieman’s wing and worked alongside her focusing on the American Indian Culture and Research Journal at the Center.
Although Cheyenne grew up in Los Angeles, which consists of one of the largest urban American Indian populations in the country, UCLA was Cheyenne’s exposure to other American Indians like herself. She enrolled into UCLA as a pre-Business and Economics major, but after spending her first couple of years surrounded by peers who inspired her and supported by the faculty and staff at the American Indian Studies Center, she decided to pursue American Indian Studies. She knew she wanted to work with tribes, specifically in California, and to assist them in any way she can, so when she was presented with the opportunity to enter a Pathways internship with the Bureau of Indian Affairs, she took it.
With her experience gained from working with the Publications Unit and service learning courses at UCLA, she was accepted into the Pathways program with the BIA. She first worked with the Southern California Agency in Riverside, then with the Pacific Regional Office in Sacramento. Cheyenne was working remotely when she was offered a permanent position with the Sacramento office. She is currently working in the Realty Department with a focus working with the California Fee-to-Trust Consortium, converting private land to land in trust for California tribes.
“My time at UCLA has been integral to my transformation to the person I am today. Along with the education and resources I received here, the people I met here inspired me in several ways. Their commitment and passion to serve American Indians and their communities motivated me to move forward with my desire to help California tribes in particular. I cannot thank Pamela Grieman, my dear mentor and friend, and the Center enough for their guidance during my time at UCLA. Even during the most difficult times of my life, I have always been supported by them. I want to pay that kindness forward with everything I do in the future.”