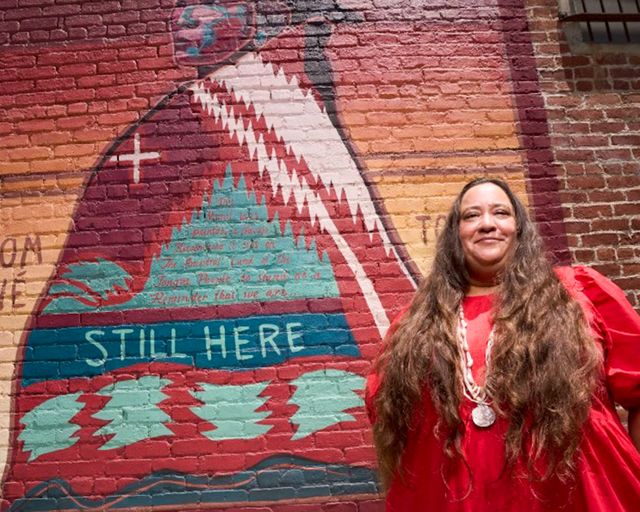 This September we are highlighting Native Bruin Angela Mooney D’Arcy (Acjachemem), class of 2004, J.D., Concentration in Federal Indian Law and Critical Race Studies.
Angela Mooney D’Arcy is Acjachemem. Her Nation’s ancestral homelands include the area also known as Orange County, California. She has been working with Native Nations, Indigenous people, grassroots and nonprofit organizations, artists, educators and institutions on environmental and cultural justice issues for over twenty years. She is the Executive Director and Founder of Sacred Places Institute for Indigenous Peoples (SPI). SPI’s mission is to build the capacity of Native Nations and Indigenous Peoples to protect sacred lands, waters, and cultures. The organization’s long-term goal is to create paradigm shifts that support environmentally and socially just systems and assure the continuation of Indigenous cultures and people. As the Executive Director, Angela works to amplify Indigenous voices and priorities regarding their ancestral homelands and homewaters.
SPI recently celebrated its 10th anniversary and now houses six programs–Sacred Ecologies, Indigenous Waters, Indigenous Media, Ocean Protectors, Indigenous Youth Environmental Justice, and Indigenous Just Transitions–that uplift Indigenous leadership and expertise on environmental and climate justice issues. SPI’s current work includes the Indigenous Land Use Planning & Rematriation program which seeks to directly support land rematriation and empower tribal governments and tribal community leaders–especially Elders and youth–to identify and advance their community-driven land and water planning goals within their ancestral homelands. SPI’s current land rematriation work focuses on Geŋa, a 400-acre coastal site at the confluence of the Wanáw Waníicha (Santa Ana River) and Móomat (ocean) in an area of Orange County identified as culturally significant by the Acjachemem and Tongva tribal communities. The Mountain Recreation Conservation Authority, the title holder of the land, adopted a resolution in August 2022, designating SPI to lead the development of the Tribal Access and Engagement Plan for the site. Angela is honored and grateful for the opportunity to work with her own Acjachemem tribal communities and Tongva Gabrielino communities in support of land rematriation and land access in their homelands.
If you would like to learn more about Sacred Places Institute, please visit:
www.sacredplacesinstitute.org
Personal Quote:
“To me, colonization is at its core a severing of relationships: severing relationships between people and the land, people and one another, people and culture, the list goes on. Decolonization becomes possible when we think about it as repairing relationships – particularly people’s relationship to land and to one another. I am grateful that my time at UCLA afforded me the opportunity to build relationships and be in a community with many brilliant and powerful Indigenous people whose commitment to uplifting their communities continues to inspire and guide my work today.”