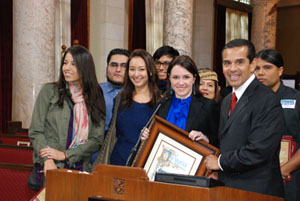 On Friday, Oct. 30, Mayor Antonio R. Villaraigosa and the Los Angeles City Council honored the UCLA American Indian Studies Center on the occasion of its 40th anniversary by presenting a proclamation to the center’s acting associate director, Angela Riley, in Council chambers at City Hall.

The presentation coincided with City Hall’s celebration of Native American Heritage Month, which included music and dancing by Native American groups and tributes to Native elders. 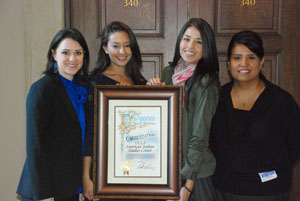 “This honors all the people who have worked hard at the center for the past 40 years and all the ancestors, elders and Native people of Southern California,” Riley said. “We look forward to celebrating the 100th anniversary. Our hope and goal is to develop a vision for the future that supports and facilitates the activities of Native Americans in this region and branches out globally to support indigenous people around the world.”

In his presentation, Villaraigosa spoke fondly of being a student at UCLA in the 1970s, when he and others spent much of their time in Campbell Hall, often inspired by stories of the contributions of the communities represented by the four ethnic studies centers housed there — the American Indian Studies Center, the Chicano Studies Research Center, the Asian American Studies Center and the Bunche Center for African American Studies. All were founded in 1969.

To celebrate the centers’ accomplishments, as well as UCLA’s broader achievements in fostering diversity, UCLA Chancellor Gene D. Block has dedicated the 2009–10 academic year to “Celebrating 40 Years of Ethnic Studies at UCLA,” and a wide array of activities and events have been planned.