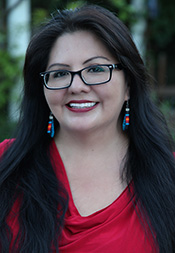 Pamela J. Peters is a multimedia Indigenous documentarian from the Navajo (Diné) Reservation and a 2011 graduate who earned a BA in American Indian Studies (AIS) and Film & Television Studies. Her Diné first clan is Táchii’nii (Red Running Into the Water People), which she uses to identify her photography work. Pamela’s multimedia photography and video work explore her vision of what she calls “Indigenous Realism,” which examines the lives and complexities of contemporary American Indians. Her work pushes viewers to critically analyze the psychological and historical structures underlying the representation of Native Americans in mass media. As a Navajo living in the city, she has experienced firsthand the social impact of the negative, inaccurate, and insulting images of stereotyped American Indians still seen in film and television, and she is inspired by her mission to counteract those stereotypes. The portraits she takes are imbued with the Indigenous people living today, not inhabiting some clichéd, pre-modern past.

“There is tremendous power in film, television and narratives. I remember as a child watching Hollywood Western films portraying American Indians as villains and labeled for death. These films were diminishing and distorting the history and identity of many tribal nations. I knew then something didn’t make sense; that sociological damage was being done. I struggled to reconcile my life with what I saw in movies compared to how I was actually living. When people say ‘Indian’, the first image that comes to mind is a relic Indian in buckskin and feathers, not a contemporary image. I wanted to change that.

My dual studies now help me in the work that I do as a multimedia artist.  AIS helped me understand how the U.S. Government generated Indian Policies in an effort to diminish rights and the cultural understanding of Indian people in society.  Film & Television Studies taught me the sociological and demeaning damage that is generated in visual images and narrative, and thereby justify U.S. policies forced upon Indian people.

My multimedia work is designed to combat the harm and prejudice that history and film has done to American Indians. I will continue to make socially conscious multimedia projects about American Indians, about the reality of our unique historical experiences, about the many sovereign Indian nations in this country and their impact on contemporary life. We all can make the collective consciousness to reimagine the way Indians are seen today.”