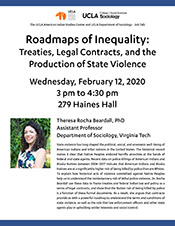 Presented by Theresa Rocha Beardall, PhD, Assistant Profeessor in the Department of Sociology at Virginia Tech

State violence has long shaped the political, social, and economic well-being of American Indians and tribal nations in the United States. The historical record makes it clear that Native Peoples endured horrific atrocities at the hands of federal and state agents. Recent data on police killings of American Indians and Alaska Natives between 2008–2017 indicate that American Indians and Alaska Natives are at a significantly higher risk of being killed by police than are Whites. To explain how historical acts of violence committed against Native Peoples help us to understand the contemporary risk of lethal police violence, Dr. Rocha Beardall use these data to frame treaties and federal Indian law and policy as a series of legal contracts, and show that the Native risk of being killed by police is a function of these formal documents. As a result, she argues that contracts provide us with a powerful roadmap to understand the terms and conditions of state violence, as well as the role that law enforcement officers and other state agents play in upholding settler interests and social control.

Theresa Rocha Beardall (Oneida/Sault Ste. Marie) is an Assistant Professor of Sociology and American Indian Studies at Virginia Tech. She received her Ph.D. from Cornell University in Sociology (2019) and her J.D. from the University of Illinois at Urbana-Champaign (2014). Theresa’s research investigates how systems of law and agents of the state create and reinforce social inequality. In one thread, she examines how the legal construction of tribal sovereignty has shifted over time and the implications of this change for the social, political, and legal status of American Indians. In the second thread, she examines the role that labor law and community activism play in shaping and redefining local law enforcement practices. Throughout her work, she pays critical attention to the way that contractual agreements distribute power, legal advantages, and economic incentives. Theresa is a proud Los Angeleno and former high school science teacher at Locke High School.