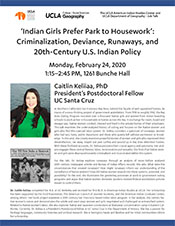 In Northern California’s San Francisco Bay Area, behind the façade of well-appointed homes, lie traces of a once-thriving project of government assimilation. From 1918 to roughly 1942, the Bay Area Outing Program recruited over a thousand Native girls and women from Indian boarding schools to work as live-in housemaids in homes across the Bay. In exchange for room, board and meager pay, Native women cooked, cleaned and lived in the private homes of their employers. This talk examines the underanalyzed history of outing and focuses on the Native women and girls who fled this coerced labor system. Dr. Keliiaa considers a spectrum of runaways; women who had very hasty, public departures and those who quietly left without permission or knowledge. To this end, she closely examines powerful stories of women and girls who expressed their dissatisfaction, ran away, stayed out past curfew and wound up in Bay Area detention homes. With these firsthand accounts, Dr. Keliiaa uncovers their crucial agency and autonomy. Her analysis engages three central themes; labor, incarceration and sexuality. She finds that Native women and girls were disproportionately criminalized and incarcerated within this system.

For this talk, Dr. Keliiaa explores runaways through an analysis of never-before analyzed 20th-century newspaper articles and Bureau of Indian Affairs records. She asks: What were the circumstances that created runaways? How might runaways inform our understanding of the surveillance of Native women? How did Native women rework into these systems, potential, and possibility? To this end, she illuminates the gendering processes at work in government outing programs and argue that Native women domestic workers resisted federal assimilation policies meant to control them.

Dr. Caitlin Keliiaa completed her B.A. at UC Berkeley and received her first M.A. in American Indian Studies at UCLA. Her scholarship has been supported by the Ford Foundation, The American Council of Learned Societies, and the American Indian Graduate Center, among others. Her book project examines a 20th-century San Francisco-based Indian labor program. In her analysis, she centers Native womenâ€™s voices and demonstrates the subtle and overt ways women and girls negotiated and challenged an entrenched system. Related to Native womenâ€™s labor, she also explores Native and Japanese connections at Manzanar concentration camp in Eastern California. Currently, Dr. Keliiaa is a President’s Postdoctoral Fellow at UC Santa Cruz in the Department of History. She has a passion for heritage languages, community histories and archival research. She is Yerington Paiute and Washoe and her tribal communities inform her scholarship.