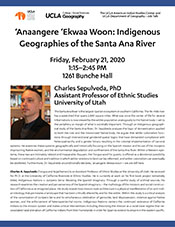 The Santa Ana River is the largest riparian ecosystem in southern California. The 96-mile river has a watershed that spans 2,840 square miles. What was once the center of life for several tribal nations is now viewed by the settler population analogously to the Native body — set to the periphery or margin of what is societally important. Through an Indigenous geographical study of the Santa Ana River, Dr. Sepulveda analyzes the logic of domestication applied to both the river and the missionized Native body. He argues that settler colonialism functions through intersectional gendered spatial logics that have demanded compliance with heteropatriarchy and a gender binary resulting in the colonial implementation of carceral systems. He examines these systems geographically and historically focusing on the Spanish mission and its use of the monjerio imprisoning Native women, and the environmental degradation and confinement of the Santa Ana River. Within a Western episteme, these two are intimately related and inseparable. Kuuyam, the Tongva word for guests, is offered as a decolonial possibility based on continued culture and tradition in which settler relations to land can be reformed, and settler colonialism can eventually be abolished. Furthermore, Dr. Sepulveda unconditionally declares, ‘anaangere ‘ekwaa woon — we are still here.

Charles A. Sepulveda (Tongva and Acjachemen) is an Assistant Professor of Ethnic Studies at the University of Utah. He received his Ph.D. at the University of California Riverside in Ethnic Studies. He is currently at work on his first book project tentatively titled, Indigenous Nations v. Junípero Serra: Resisting the Spanish Imaginary. Through a careful study of archival sources, his research examines the creation and pervasiveness of the Spanish imaginary — the mythology of the missions and social construction of California as an imagined place. His study reveals how mission style architecture is a physical manifestation of an anti-Indian ideology that permeates a landscape that has been critically altered by and for the settler. Within this study is a critical analysis of the canonization of JunÃ­pero Serra and its simultaneous celebration of genocide, land dispossession, violence against Native women, and the enforcement of heteropatriarchal norms. Indigenous Nations centers the continued resistance of California Indians to the mission system and makes critical interventions including theorizing the mission as a racial slave regime that necessitated natal alienation of California Indians from their homelands in order for Spain to extend its empire in the eastern pacific.