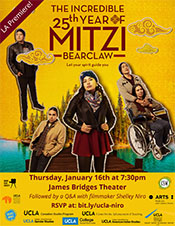 RVSP at bit.ly/ucla-niro. Seats are limited.

Join us for the LA Premiere of Shelley Niro’s latest feature film, The Incredible 25th Year of Mitzi Bearclaw. The screening will be followed by a Q&A with filmmaker Shelley Niro herself. Seats will be first come, first served for those who RSVP. This event is co-hosted by Bruin Film Society, Melnitz Movies, UCLA American Indian Studies Center, UCLA Department of Gender Studies, UCLA Center for the Advancement of Teaching, UCLA Canadian Studies Program, UCLA Center for the Study of Women, UCLA Institute of American Cultures, UCLA World Arts and Culture/Dance, UCLA College Social Sciences Division and UCLA American Indian Studies Interdepartmental Program.

Synopsis:
As MITZI BEARCLAW turns 25 years-old, she is faced with a tragic decision — stay in the big city to pursue her dream of designing hats or leave her boyfriend and return home to her isolated reserve to help care for her sick mother. Loyal to her family, Mitzi reluctantly returns to Owl Island to find that not much has changed. Her confidence and modern style clash with the sleepy, slow-paced island; the bullies are the same; the handsome HONEYBOY is still running the water taxi; and ANNABELLE, Mitzi’s mother is still as bitter and unloving as ever. She’s also reunited with her spiritual friends, FAITH, HOPE, and CHARITY who guide her as she navigates a year of anger, loss and love. Mitzi is soon surprised to find comfort in being home and starts to question her destiny.
Trailer: https://vimeo.com/364824764/c4bf465022

The Incredible 25th Year of Mitzi Bearclaw is produced by Turtle Night Productions, Freddie Films and Circle Blue Entertainment with the participation of Telefilm Canada, the Northern Ontario Heritage Fund Corporation (NOHFC) and Ontario Creates. levelFilm is the Canadian distributor.

Center for the Study of Women

Department of World Arts and Culture/Dance