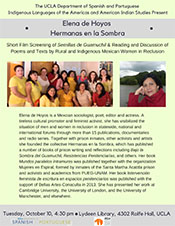 Short film screening of Semillas de Guamuchil & Reading and Discussion of Poems and Texts by Rural and Indigenous Mexican Women in Reclusion.

Elena de Hoyos is a Mexican sociologist, poet, editor and actress. A tireless cultural promoter and feminist activist, she has visibilized the situation of men and women in reclusion in statewide, national and international forums through more than 15 publications, documentaries and radio series. Together with prison inmates, other activists and artists, she founded the collective Hermanas en la Sombra, which has published a number of books of prison writing and reflections including Bajo la Sombra del Guamuchil, Resistencias Penitenciarias, and others. Her book, Mundos paralelos intramuros was published together with the organization Mujeres en Espiral, formed by inmates of the Santa Martha Acatitla prison and avtivists and academics from PUEG-UNAM. Her book Intervencion feminista de escritura en espacios penitenciarios was published with the support of Bellas Artes-Conaculta in 2013. She has presented her work at Cambridge University, the University of London, and the University of Manchester, and elsewhere.

Department of Spanish and Portuguese