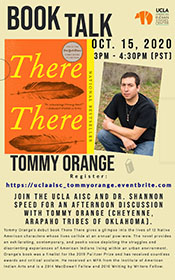 Join the UCLA AISC and Dr. Shannon Speed for an afternoon discussion with Tommy Ornage (Cheyenne and Arapaho Tribes of Oklahoma).

Tommy Orange’s debut book, There There, gives a glimpse into the lives of 12 Native American characters whose lives collide at an annual pow-wow. The novel provides an exhilarating, contemporary, and poetic voice depicting the struggles and disorienting experiences of American Indians living within an urban environment. Orange’s book was a finalist for the 2019 Pulitzer Prize and has received countless awards and critical acclaim. He received an MFA from the Institute of American Indian Arts and is a 2014 MacDowell Fellow and 2016 Writing by Writers Fellow.

UCLA is a tobacco-free campus.