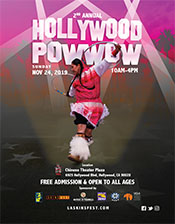 The LA SKINS FEST will hold its second Hollywood Pow Wow in front of the iconic TCL Chinese Theater. The Pow Wow takes place Saturday, November 24th, 2019 starting at 9am. The event will feature traditional singing, dancing and youth performances from numerous tribes around the country.

Special thanks to the Chinese Theater for supporting the pow-wow and the Native American community of Los Angeles.