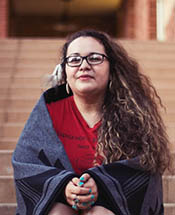 A “Bruin4Life,” Heather Torres Esq. is a citizen of San Ildefonso Pueblo, and also comes from the Diné and Mexican peoples. She is the descendant of boarding school survivors, the daughter of Rose and Greg Torres, and an older sister to Christina Torres. Heather grew up in the Inland Empire of Southern California, in Yuhaaviatam and Cahuilla homelands, dreaming of going to UCLA as a young athlete. Heather currently works as the Program Director for the Tribal Law and Policy Institute, www.Home.TLPI.org, a Native-operated nonprofit with a mission to enhance and strengthen tribal sovereignty and justice while honoring community values, protecting rights, and promoting well-being. She values reciprocity and serves various organizations as a board member, many of which played a part in where she is today, including the National Native American Bar Association, the American Indian Scholarship Fund of Southern California, United American Indian Involvement, and many more.

Close to Heather’s heart is her belief that higher education is one path to maintaining strong and healthy tribal nations. One of her greatest accomplishments is building Native student programs at the University of Redlands, a Native student-support program made possible by the San Manuel Band of Mission Indians. Today, she serves as one of the tribe’s representatives on the program’s advisory committee. Recently, Heather co-authored a comment on Native recruitment and retention, “Commentary on the Recruitment and Retention of American Indian and Alaska Native Students in California Postsecondary Education Institutions” in UCLA’s American Indian Culture and Research Journal, volume 44, issue 1.

“I credit my time with the American Indian Studies department, and especially the American Indian Student Association and the American Indian Alumni of UCLA, with providing the foundational skillsets, lasting friendships, and strong mentors that guided me to where I am today. In many ways, Campbell Hall remains a home to me —I only stopped carrying an old key to the AISA lounge a few years ago— and I cannot find it in me to throw it away. As my family says, I will be a Bruin4Life.”