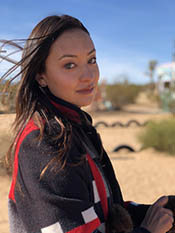 This March we are highlighting Native Bruin Tazbah Rose Chavez from the Bishop Paiute Tribe.

Tazbah Rose Chavez is a performance poet turned director and television writer. She is currently a Co-producer on FX’s new series Reservation Dogs, a former Story Editor on NBCUniversal’s Rutherford Falls and was a staffer writer for SyFy’s Resident Alien. Raised in Payahuunadu, Tazbah is a citizen of the Bishop Paiute Tribe and comes from the Nüümü, Diné and San Carlos Apache people. Tazbah is a director of film and music videos and was recently part of AT&T’s Hello Lab Filmmaker Mentoring Lab in which she wrote and directed the short film Your Name Isn’t English, executive produced by Taika Waititi and currently streaming on DirectTV. Tazbah has written ads for Nike N7, and directed health and cultural preservation campaigns for tribes throughout California. She holds a degree in American Indian Studies from UCLA, is a former intern of Sundance Institute’s Native and Indigenous Program and serves as the co-chair of the Native American and Indigenous Writer’s Committee at the Writer’s Guild of America.

“From the moment the elevator doors opened from the parking garage I knew UCLA was the school for me, and long after graduating I still return a few quarters of the year to take UCLA extension classes. There is no question that UCLA changed my life and continues to be the reason I’m where I’m at in my career today. Academically, UCLA absolutely shaped my work ethic and discipline to get things done. Many of my professors remain intellectual heroes to me, and my fellow students continue to be lifelong friends and community members.”