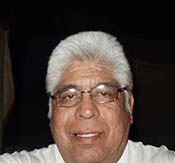 This December we are highlighting Native Bruin Reuben Duane Bending from the Yakama tribe.

Reuben Duane Bending was born and raised in Los Angeles, California. His parents moved from Phoenix to Los Angeles in 1956, after his father attended Phoenix Indian School and his mother attended Cook Bible College. Reuben attended UCLA from the fall of 1976 and graduated in 1981 with a bachelor of science degree in US history. Reuben currently works for his Yakama tribe in Toppenish, Washington as the program director for the Yakama Nation Real Estate Services Program, a program operating under a PL-638 contract, not associated with the Bureau of Indian Affairs. The purpose of the program is to serve the Yakama tribe and its members in the areas of property management which include leasing, rights of way, acquisition and disposal (which is primarily the conveyance of real property title) and probate of trust property interest. As the program director, Reuben is responsible for assuring that the transactions are done in concurrence with current federal requirements while there is an adherence and respect of tribal community values and practices.

“The Time spent at UCLA was, as far as I am concerned, a great time.  I guess you could say I’m a second-generation UCLA student.  My mother attended UCLA as well. Attending UCLA was a unique experience for me, one that I will cherish.”