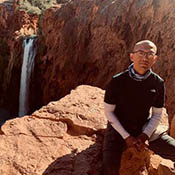 This August we are highlighting Native Bruin – Tyson Walker from the White Mountain Apache tribe.

Dr. Tyson Walker was raised on the Fort Apache and Navajo reservations in Arizona. In 2004, Tyson graduated from Alchesay High School in Whiteriver, AZ. He then joined the Air Force and was honorably discharged in 2008. Prior to UCLA, Tyson attended Shasta College and Sacramento City College. He transferred to UCLA as a Biochemistry major. Tyson never took chemistry in high school, so biochemistry at UCLA was challenging. Nevertheless, Tyson graduated from UCLA in 2013 with his Bachelor of Science in Biochemistry.

In 2014, Tyson completed a Pharmacy Post-Baccalaureate program at the University of California, San Francisco (UCSF). In the next year he worked in the pharmacy and medical laboratory at Whiteriver Indian Health Service. In 2015, Tyson gained acceptance into the Doctor of Pharmacy program at UCSF. He graduated from UCSF in 2019.

Tyson returned to work for the Native community as a pharmacist at Zuni Pueblo. Currently, Tyson is a Post Graduate Year 1 (PGY1) Pharmacy Resident at the Gallup Indian Medical Center in New Mexico. There, Tyson will gain specialized training in areas including but limited to anticoagulation, dyslipidemia, cardiology, diabetes, asthma, infectious disease and nephrology. After the completion of his residency, Tyson would like to return to work with his own White Mountain Apache Tribe.

Biochemistry at UCLA, and then pharmacy school at UCSF, altered Tyson’s perceptions toward his own capacity for learning and academic achievement. Those experiences also gave him a respected profession and a means to serve the only world he knew growing up as a child, the reservation. Over the years, Tyson has held onto words from his UCLA acceptance letter, “Of course, you are going to learn a lot about the world at UCLA. But more often than might imagine, UCLA will be where the world learns about you.” He still has the original copy of the acceptance letter.