The U.S. Census is the backbone of the U.S. official statistics system. A decennial census is constitutionally mandated to determine proportional representation in Congress. It also provides population counts that are used to allocate public services and funding across the country, and to calculate vital statistics estimates. In the time of the COVID-19 pandemic, U.S. Census data are crucial for understanding case and death rates as well. Currently, the U.S. Census Bureau is undertaking its 24th Census amid one of the most difficult enumeration periods in history. While the country faces dual threats of an economic shutdown and the public health pandemic, the decennial census is underway.

As a result, U.S. Census response rates may not be the highest priority for the country’s citizens. In prior Censuses, low response rates impacted certain populations: racial and ethnic minorities, children, those in poverty, and the highly mobile. A critical remedy is the use of Census enumerators who make direct house calls to non-response households. However, in-person enumerators may not be as viable in the time of a pandemic due to health risks to Census workers and households.

In particular, American Indian and Alaska Native nations and communities have some of the highest Census non-response rates decade after decade. There are many reasons for low rates of participation, including non-standard mailing addresses, antipathy towards the U.S. Government, and lack of familiarity with the agency and purpose of the Census, among others. To evaluate current levels of Census response among American Indian communities, we examined real time response data from the U.S. Census.

In the figure below, we take the American Indian tribal reservation response data provided as of May 13, 2020 and compare it to the 2010 response rate. The size of the circles reflects the size of the population on reservation for the AIAN alone population. We exclude Oklahoma tribes and Alaska Natives in this analysis. Additionally, we exclude those tribal reservations that have no information or have a zero recorded as a response rate in either time period. 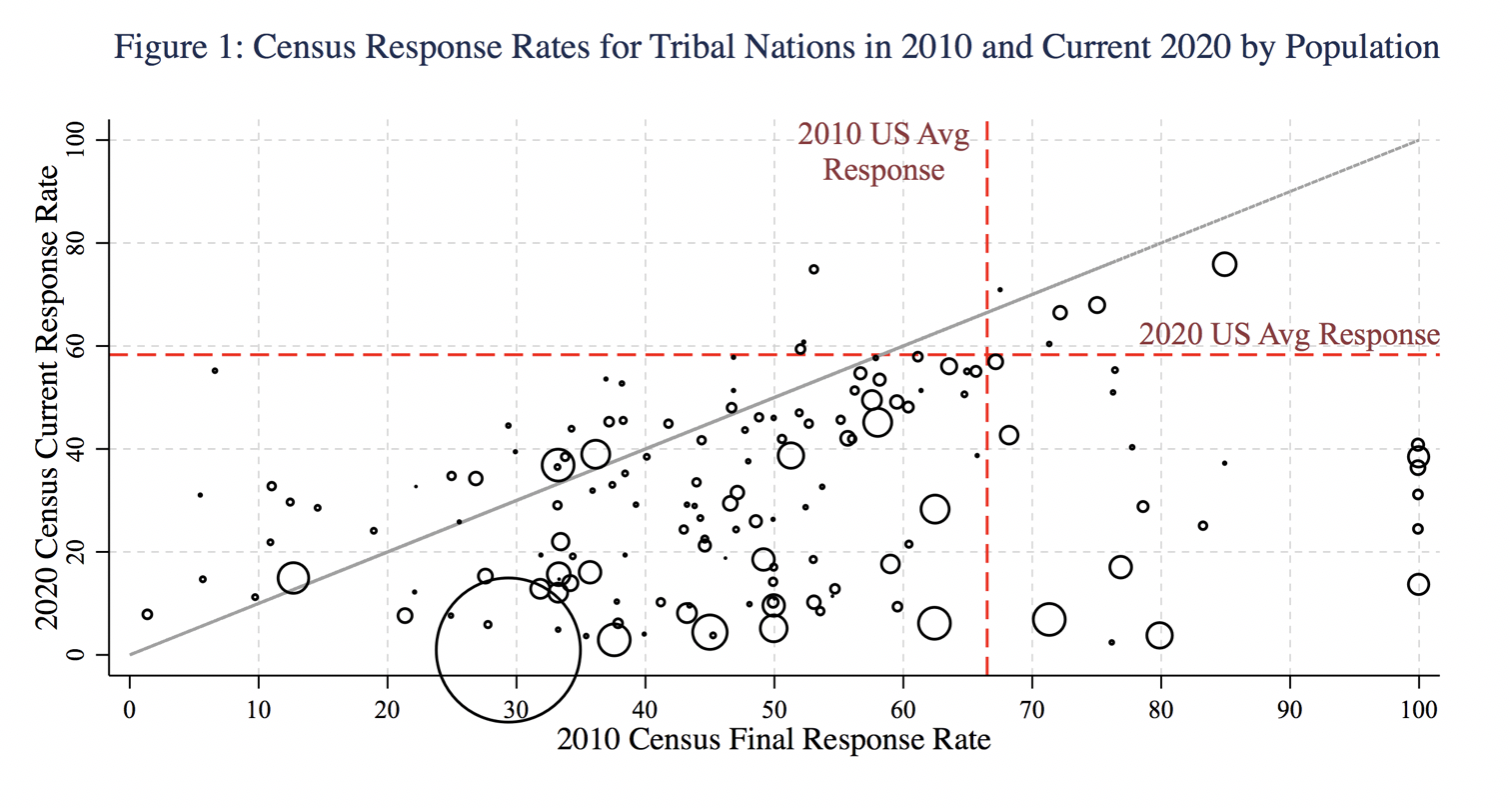 The low self-response rate during the first phase of the 2020 Census will create major challenges for the second phase, the non-response follow-up in-person interviews. Low self-response means many more labor-intensive contacts will be needed, which is particularly difficult during the pandemic. Ultimately, this may produce a significant undercount of American Indians. It is critical that we act now to reduce the response gap as much as possible and to use updated information on the location and magnitude of the gap to more effectively guide outreach efforts in the near future. Partnerships with tribal nations to ensure full and accurate counts of American Indians on reservation lands are critical.

The list below provides the information as of May 13, 2020 for response rates on American Indian reservations for the 2020 US Census. We have matched it, where possible, to the 2010 Census Response rates. These data are all publicly available from the U.S. Census Bureau online: https://data.world/uscensusbureau/2020-census-response-rate-data.