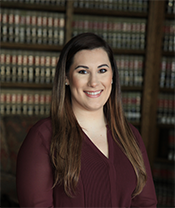 Mikaela Grace Monson-Cox is a 2015 UCLA graduate who earned a BA in American Indian Studies. Mikaela, who is Osage, went on to study law at Southwestern Law School, where she earned her JD in 2017. Mikaela currently works as a healthcare attorney in Orange County, and is licensed to practice law in both California and Washington State.

“I used to believe in order to contribute to my community I needed to build my career in the Native community. Admittedly, I felt a degree of guilt after taking a job after law school in a practice area not centered on indigenous issues. So much of my education up to that point had been focused on my Native identity that I felt like I was failing myself by building my career in a space that wasn’t centered on my community. I’ve come to realize that by being a visible representative of the Native community in a professional space I am contributing to my community.”

If not serving by way of career, Mikaela hopes to contribute in alternative ways to American Indian and indigenous communities, such as mentoring Native youth to help them navigate the educational pipeline to get into college. Additionally, she aspires to eventually work with tribes who are trying to provide healthcare or healthcare services to their tribal members and community. Mikaela serves as a critical agent of change in her understanding the representative values and contributions she offers as a Native American lawyer.

“So often we are viewed through the lens of stereotypes and false historical beliefs. As a people, we are so much more than that. We are educators, creatives, activists. We are doctors and artists, and yes, lawyers, too. Representation in any space, professional or otherwise, is important. It is important to teach our youth, and anyone else out there, that we can take up whatever space we want to fill.”