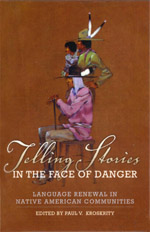 The traditions of American Indians constituted one of the four original areas of concern of the American Folklore Society, and while interest in the traditions of Native North America has vacillated among folklorists during the century and a quarter since the organization’s founding, it remains vital to the discipline. Folklorists can take heart that when non-folklorists consider those traditions, they often draw some of their ideas from interpretive approaches developed in folklore studies. Two recent books illustrate how folklore informs the work of appreciating American Indian traditional cultures.

The danger confronted by the American Indian storytelling traditions treated in Telling Stories in the Face of Danger is the extinction of the heritage languages in which they have been narrated and the concomitant loss of cultural identity for the communities whose languages face obliteration. Editor Paul V. Kroskrity has brought together ten essays, most of which are based on presentations from the 2006 meetings of the American Anthropological Association, that demonstrate the importance of storytelling in the preservation of sense of community and, in some cases, serve as a device to assist teachers who are attempting to keep heritage languages vital. While the assumptions about storytelling and identity which underlie the essays will be familiar to folklorists, readers in the discipline will find plenty of pertinent specific examples that fortify claims made for the importance of storytelling.

The communities treated by the authors are Kiowa (two essays), Southern Paiute, three northwestern California groups (Yuroks, Hupas, and Karuks), Kumiai, White Mountain Apache, Arizona Tewa, Maliseet, and Navajo. All the essays reflect longstanding commitment on the part of the authors to language-renewal projects in the communities, and several deal specifically with problems and issues that have arisen in theorizing and implementing those projects. Of course, one expects difficulties generated by school systems that promote mainstream culture and by the allure of mass media which tempt younger people away from commitment to local issues. The essayists acknowledge but do not dwell on these obvious concerns. But they do note difficulties in using stories to teach language arising from less familiar obstacles. In some communities, for example, heritage language education generates conflict between “elder purism” and linguistic syncretism. Amber A. Neely, for example, shows how Kiowa educator Alecia Gonzales uses “stories of syncretism” rather than only traditional oral narratives to illustrate language usage. This approach (not universally endorsed by Kiowas) may result in departures from traditional usages, but her approach helps to keep the Kiowa language alive and relevant. M. Eleanor Nevins and Thomas J. Nevins reflect on how storytelling traditions reflect generational protocols as well as other conventions of performance among White Mountain Apaches. Elders in the community perceive language loss as symptomatic of much more profound assimilation issues. Stories used in classroom settings which replicate patterns in mainstream education rather than those of the locality may undermine traditional relationship patterns between generations. Working with the Southern Paiute, the late Pamela Bunte found that loyalty to specific dialects raised problems about which version of the language should be privileged in the renewal process. Several of the authors, especially Paul V. Kroskrity writing about the Arizona Tewa and Gus Palmer Jr. dealing with the Kiowa, note that functional language acquisition requires more than a mastery of phonology, grammar, and vocabulary, but also involves a knowledge of customs of appropriate usage.

Folklorists will find much to interest them in these essays. Not only do the authors demonstrate their familiarity with ideas about storytelling that have emerged from the discipline of folklore studies, but also in many cases their work parallels and extends what some folklorists have been doing in terms of representation of orally disseminated material on the printed page. Bernard C. Perley deconstructs previous attempts to publish versions of Maliseet stories by folklorists and others. Sean O’Neill indicates how storytelling maintains linguistic boundaries among northern California groups who otherwise have much in common culturally. Anthony K. Webster demonstrates ways in which contemporary Navajo poets are maintaining traditional elements in their published work. All of the essays demonstrate awareness not only of the issues confronting the communities they treat but also of more general concerns such as problems in entextualizing orally performed stories.

This is a valuable collection which demonstrates how “applied folklore” can work. Certainly anyone interested in the maintenance and revitalization of American Indian oral traditions can benefit from the case histories presented by the authors, but all folklorists seeking specific examples of how storytelling coordinates with cultural identity will find much of interest.

The most famous event in Native American-Euroamerican relations has probably been the battle conventionally known as “Custer’s Last Stand.” As we know, this military engagement, which occurred in southeastern Montana in 1876, a week or so before the centennial of the Declaration of Independence, developed a symbolic life which foregrounded some of the central themes of the Euroamerican
experience: the conflict between civilization and savagery, the inevitability of manifest destiny, and a brave soldier’s heroic martyrdom for the good of the community. We also probably know that this symbolism actually had no real foundation in the ill-advised attempt by a unit of the U.S. Army to overrun an encampment of American Indians in the manner that Custer himself had effected eight years previously on the Washita River. So much has been written about this event and its symbolic aftermath that it may be difficult to imagine how Norman K. Denzin could find something new to say. But he has, in fact, focused on a way of entering into the conversation on the Battle of the Little Bighorn (or Greasy Grass) that offers some innovative insights: selected examples from the hundreds of visual representations of the event that began to appear shortly after it occurred.

Perhaps ironically the most famous of those representations have come from Euroamerican artists, and none of them has any basis in first-hand accounts. The most well-known painting is probably that of Casilly Adams, which was turned into a lithograph by Otto Becker for the Anheuser-Busch Brewing Company in 1896 and consequently found an extensive viewership when it was displayed in taverns throughout the United States. The painting that now enjoys official endorsement is that of Eric von Schmidt (whom older folklorists will remember from the folksong revival of the 1960s). His Where Custer Fell graces signage at the battlefield site as well as brochures issued by the National Park Service. Though these and other painters purportedly did some research and may have gotten some details right, they do not really represent what happened, primarily because they focus on Custer. From the perspective of most participants in the battle, his death was not the focus. Instead, they perceived Custer’s demise as part of a larger narrative in which the most important factor was their repelling the invaders and protecting their community from the massacre that Custer and his troops intended. Thus nineteenth-century paintings by Native Americans, which Denzin also treats, are likely to ignore Custer altogether and focus instead on U.S. attempts to burn the village and the general routing of the invading troops. Of course, twentieth-century paintings by American Indians cannot ignore the Custer who has become such a central figure in the symbolism of the Old West, but they have found ways to undermine his heroic image.

Denzin has assembled a wide range of documentary support for his treatment of specific paintings and has drawn upon a plethora of disciplinary perspectives for his interpretations of them. His work and insights may not get the attention they deserve, though, because of his approach to presenting them. Partially to avoid assuming and creating for the reader a privileged stance from which to evaluate the Custer paintings and partially as an experiment in multivocality, Denzin has written a series of dramatic scripts instead of creating a sustained narrative. Each chapter (or play) has characters from an extensive dramatis personae interacting with one another and the reader (or audience) to advance a set of reactions to or interpretations of the material. Characters include the artists themselves, figures who were involved in the battle, art historians, culture critics, mythological personages, and a couple of folklorists (Barbara Kirschenblatt-Gimblett and John Dorst). Sometimes Denzin quotes them directly and documents the source of the quoted material, but usually he paraphrases. Sometimes he creates — apparently from whole cloth — what his speakers say. For example, contemporary American Indian writers Louise Erdrich and Elizabeth Cook-Lynn are made to offer opinions, but works by neither of them are listed in Denzin’s bibliography. He has warned the reader both on the copyright page and in his introduction that speakers’ opinions are the “conjecture of the author” (19), but reliance on the author’s conjectures and paraphrases does seem to undermine the claim to multivocality. The main problem, though, is that the approach to presentation may hinder Denzin’s valuable information and insights from being taken as seriously as they deserve to be. The dramatic format might work in the classroom and, should anyone actually perform the chapters, as readers’ theater, but what they gain in immediate impact may not offset losses in comprehensibility. Yet Denzin’s motivations for his method are certainly commendable, and his approach should be viewed as a useful, informative experiment in the methodology of presenting multiple perspectives on a contested topic. Folklorists will be interested in how Denzin has attempted to attend to a variety of opinions, including those of folklorists.

Another problem with presentation arises from the exigencies of publishing over which Denzin probably had little control. He often has characters comment on details in the paintings which are very difficult to discern in the plates that appear in the volume.
Enlarging those plates would have been prohibitively expensive, but the reader who wants to appreciate fully the significance of the paintings will have to look at them elsewhere. Helpfully, Denzin provides URLs for online representations of many of them.

Despite some reservations about the manner of presentation, I believe this is an important book not only for our understanding of “Custer’s Last Stand” but also for our more general appreciation of the presentation of Indian-white relations in expressive culture. It does not draw as extensively upon folklore studies as does the collection edited by Kroskrity, but the discipline finds its place in Denzin’s eclectic approach to the paintings

Read this review on-line at: http://www.indiana.edu/~jofr/review.php?id=1414

(All JFR Reviews are permanently stored on-line at http://www.indiana.edu/~jofr/reviews.php)