The United Nations-Indigenous Peoples Partnership (UNIPP) held its second Policy Board meeting in New York on 27-28 October 2011 to review and approve proposals for UN country programs designed in partnership with indigenous peoples.

The Board saw the active participation of indigenous expert members Raja Devasish Roy (Co-Chair of UNIPP and Member of the UN Permanent Forum on Indigenous Issues), Adelfo Regino Montes (Secretary of Indigenous Affairs, Government of Oaxaca, Mexico), and Angela Riley (Director of American Indian Studies Center and Professor of Law at the University of California Los Angeles, and Chief of the Supreme Court of the Citizen Potawatomi Nation, USA). 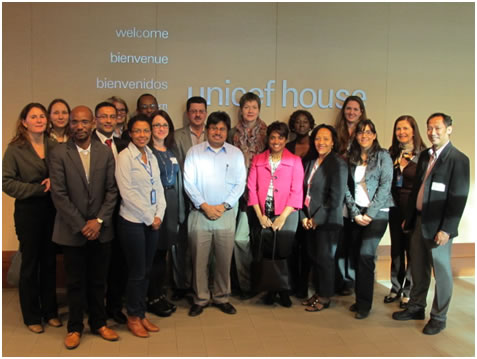 Aided by the UNIPP Secretariat (Albert Barume of ILO) and UNIPP focal points (Sonia Martinelli-Heckadon of UNFPA, Shireen Said and Beatriz Fernandez of UNDP, Sushil Raj of OHCHR, and Beatrice Duncan of UNICEF) the following senior representatives of the United Nations took part in the Board meeting:

The meeting was opened by the host, Rina Gill of UNICEF, and the morning and afternoon session was chaired by Marcia V.J. Kran from the Office of the High Commissioner for Human Rights.  Ms. Kran made note of the rapid progress and steps taken by the Partnership since its launch in May 2011.  Within the span of a few months a second Board meeting was taking place to review and approve country and regional proposals submitted by joint UN programs designed in partnership with indigenous peoples. She reiterated the importance of senior level commitment from the United Nations, as well as reviewing these pilot initiatives from a strategic perspective in order to achieve results in a short time frame.

“I would like to see UNIPP move forward as a global initiative which can make a difference and fill the gaps that other Multi-Partner Trust Funds are not able to.  This means the core human rights grounding of UNIPP is and should remain an essential feature in all our decisions” she said.   Ms. Kran also provided a target of USD 10 to 14 million for UN partners to mobilise and scale up resources over the next few years in order to fund larger interventions.

The Chair then invited Dr. Myrna Cunningham, Chairperson of the UN Permanent Forum on Indigenous Issues to make a few remarks on the Partnership.  Dr. Cunningham expressed appreciation for senior level UN representation at the Board meeting, since it demonstrated a serious commitment from UN organisations. She counted on UNIPP to facilitate the implementation of UN Permanent Forum recommendations to UN Country Teams, and challenged UNIPP to support at least one regional and ten country programs in the first three years of its operation.  Dr. Cunningham encouraged the Partnership to consider priorities in view of regional and global initiatives such as the 2014 World Conference on Indigenous Peoples.  She also expressed her appreciation to UNIPP for sending a message to UN country teams to work jointly with indigenous peoples.

Douglas Gardner from UNDP reiterated the point of UN delivering as one while keeping in mind the challenge of the Special Rapporteur on the rights of indigenous peoples, James Anaya, during the 20 May 2011 launch to help deliver concrete change on the ground.

The Board then considered and adopted the minutes of the First meeting of July 2011, Terms of Reference of the Policy Board, Operational Guidelines, and Strategic Framework for 2011-2015.   Kevin Cassidy from the ILO presented the communications and fundraising strategy which would assist the Partnership in scaling up the fund and also reaching a broader audience.   The Board decided to set aside funds in the amount of USD 135,000 for administrative costs to support UNIPP, and USD 75,000 in reserve funds.

Bisrat Aklilu, Director of the Multi-Partner Trust Fund Office and ex-officio briefed the Board on the financial status of the fund, which had received USD1.44 million from the Government of Denmark over a two year period, and a pledge of USD 68,000 from the Government of Finland.  He emphasized that while the amounts were comparatively smaller than other Multi-Partner Trust Funds of the United Nations, the UN-Indigenous Peoples Partnership tackled some of the most pressing issues, and served the role of a catalyst to initiate joint programs on the grounds, which could potentially be built on by other UN funds and donors.

The bulk of the meeting was dedicated to reviewing and approving seven proposals (six country level, and one regional program from Southeast Asia).  The Board approved proposals over a two year cycle totaling USD 1.32 million.  The following were considered and approved with some recommended revisions by the Board:

In the dialogue with donors, Ambassador Staur expressed an interest in seeing future proposals submitted to UNIPP ahead of the Board meeting.  He also asked how the current proposals related to the United Nations Development Assistance Framework, and expressed his Government’s assistance in future fundraising efforts.  The Deputy Permanent Representative of Finland remarked that it was very good to see UNIPP “take off” in such a short time.  He offered Finland’s political support for the initiative and was open to requests beyond funding.  Mr. Taalas also asked the Board how indigenous expertise was reflected in decision making.

Raja Devasish Roy highlighted that he was as an indigenous expert on the Board and member of the UN Permanent Forum.  He emphasized that proposals were reviewed while keeping in mind the role of indigenous peoples in the design, implementation and evaluation of the joint programs.  Adelfo Regino Montes emphasized the necessity of coordination between the UN and indigenous communities on the ground, with a view to implementing provisions of the UN Declaration and ILO Convention 169.  Angela Riley highlighted the instrumentality of indigenous peoples in the design and delivery of these programs with concrete deliverables in mind.

The Board concluded by stressing the importance of presenting UNIPP’s decisions and progress at the next session of the UN Permanent Forum on Indigenous Issues in May 2012.

**************
Please see the following link for further information on UNIPP: http://mdtf.undp.org/factsheet/fund/IPP00
The International Labour Organisation currently serves as the Secretariat of UNIPP and Office of the High Commissioner for Human Rights as the Co-Chair for participating UN organisations.

Administration of UNIPP Trust Fund is entrusted to the UNDP MPTF Office.