THE EXILES
A Milestone Film
(www.exilesfilm.com)

THE EXILES chronicles one night in the lives of young American Indian men and women living in the Bunker Hill district of Los Angeles. Based entirely on interviews with the participants and their friends, the film follows a group of exiles — transplants from Southwest reservations. Filmmaker Kent Mackenzie first conceived of The Exiles during the making of his short film Bunker Hill in 1956. In July 1957, Mackenzie began to spend time with some of the young American Indians living in downtown Los Angeles. After a couple of months, he broached the subject of making a film that would present a realistic portrayal of Indian life in this urban community. The Exiles was originally released in 1961 and was restored by the UCLA Film & Television archive in 2008. 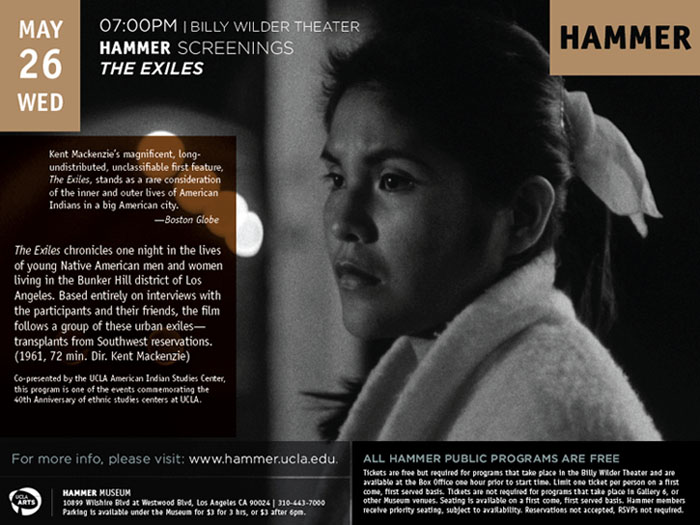 Director Sterlin Harjo (Seminole/Creek) was selected in 2006 as one of the inaugural recipients (and the first Native American recipient) of the prestigious United States Artists Fellowship, which is supported by a consortium of major foundations. He was selected for a 2006 Media Arts Fellowship from Renew Media (now a fellowship program of the Tribeca Film Institute). Also in 2006 Harjo won the top Creative Promise Award from Tribeca All Access for his script Before the Beast Returns (working title).

Harjo’s first feature film Four Sheets to the Wind premiered at the 2007 Sundance Film Festival and has been widely screened nationally and internationally at film festivals and art cinemas. To enable concentrated work on this production, Harjo was selected in 2004 as one of the Sundance Institute’s first five Annenberg Film Fellows, a multi-year program launched to provide filmmakers with financial support and full involvement in Sundance’s professional workshops. Harjo’s short film Goodnight, Irene, which premiered at the 2005 Sundance Film Festival, was cited for Special Jury Recognition at the Aspen Shortsfest. In 2009 Harjo served as an advisor for the Sundance Institute Ford Foundation Film Fellowship and in 2008 he was a member of the Oklahoma Summer Arts Institute film and video faculty. Harjo grew up in Holdenville, Oklahoma, and lives in Tulsa. [Bio from Native Networks: National Museum of the American Indian]