The Paradox of Indigeneity in the Philippine Context 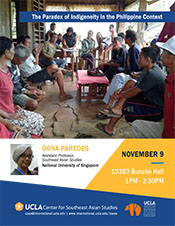 In the Philippines, as in the rest of Southeast Asia, “Indigenous Peoples” typically exist in a fundamental tension with state power and national identity. Although nearly all Filipinos today have indigenous ancestry, indigenous minorities have generally been viewed as racially distinct and peripheral to Filipino notions of citizenship. Similarly, the nationalist construction of Philippine history has long tended to focus on mainstream, mainly Catholic Filipinos in the lowlands, to the exclusion of all Others. Today, however, Philippine IPs determinedly pursue full citizenship in the areas of political representation, identification, land, education, and share many of the modern aspirations of mainstream Filipinos. Drawing on my own research with the Higaunons of northern Mindanao, I will discuss some of the challenges of securing and maintaining “Indigenous” status in the face of Filipino prejudices that simultaneously fetishize and marginalize indigenous minorities. The fundamental paradox of modern indigeneity in the Philippine context is that Lumads, Igorots, and other indigenous minorities are romanticized as bearers of a “pure” Philippine cultural heritage uncorrupted by colonial influences, yet consequently regarded as “backward” and “primitive” and thus not a legitimate part of modern Philippine society. IP’s also have their own notions of ‘indigeneity’ that may diverge widely from how it is conceptualized by the national government, mainstream Philippine society, and/or the international community.

Oona Paredes is an Assistant Professor in the Department of Southeast Asian Studies and Faculty Convenor for the Minor in Religious Studies at the National University of Singapore.Â