Skip to content
Home Events Salmon Woman and Her Children

Salmon Woman and Her Children 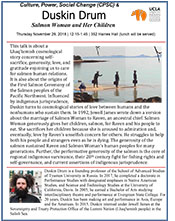 This talk is about a Lhaq’temish cosmological story concerning self-sacrifice, generosity, love, and gratitude enjoining us to care for salmon-human relations. It is also about the origins of the First Salmon Ceremony of the Salmon peoples of the Pacific Northwest. Influenced by indigenous jurisprudence, Duskin turns to cosmological stories of love between humans and the nonhumans who sustain them. In 1992, Jewell James wrote down a version about the marriage of Salmon Woman to Raven, an ancestral chief. Salmon Woman generously gives her children, salmon, for Raven and his people to eat. She sacrifices her children because she is aroused to admiration and, eventually, love by Raven’s unselfish concern for others. He struggles to help both his people and strangers even as he is dying. The generosity of the salmon sustained Raven and Salmon Woman’s human peoples for many generations. Further, the performative generosity of the salmon is the core of regional indigenous survivance, their 20th century fight for fishing rights and self-governance, and current assertions of indigenous jurisprudence.

Duskin Drum is a founding professor of the School of Advanced Studies of Tyumen University in Russia. In 2017, he completed a doctorate in Performance Studies with designated emphases in Native American Studies, and Science and Technology Studies at the University of California, Davis. In 2005, he earned a Bachelor of Arts studying interdisciplinary theatre and performance at Evergreen State College. For 20 years, Duskin has been making art and performance in Asia, Europe and the Americas. In 2015, Duskin interned under Jewell James at the Sovereignty and Treaty Protection Office of the Lummi Nation (Lhaq’temish people) in the Salish Sea.