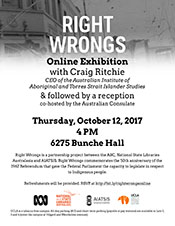 “Right Wrongs” Online Exhibition with Craig Ritchie, CEO of Australian Institute of Aboriginal and Torres Strait Islander Studies, and followed by a reception co-hosted by the Australian Consulate.

On May 27, 1967, Australians voted in a referendum to change how Aboriginal and Torres Strait Islander people were referred to in the Constitution. Explore these personal stories, opinions and historical recordings of what happened. 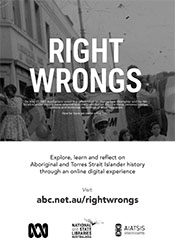 “Right Wrongs” is an online exhibition developed by the Australian Institute of Aboriginal and Torres Strait Islander Studies, in partnership with the ABC, and National and State Libraries Australasia. “Right Wrongs” commemorates the 50th anniversary of the 1967 Referendum that gave the Federal Parliament the capacity to legislate in respect to Indigenous people.