Fred Hoxie on This Indian Country 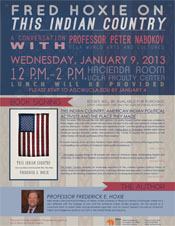 A conversation with Professor Peter Nabokov

Lunch will be provided. Please RSVP to aisc@ucla.edu by January 4.

BOOK SIGNING
Books will be available for purchase. Credit Card/Debit Card only (no cash or checks accepted).

This Indian Country: American Indian political Activists and the Place They Made
From the early 19th through the late 20th century, U.S. policy toward Native Americans unfolded in three stages: wars and often violent removal from the east to the west; concentration in reservations and the attempt to civilize an inferior and dependent race; and the granting of only limited tribal self-governance. University of Illinois historian Hoxie (Talking Back to Civilization) profiles eight Native American lawyers, lobbyists, writers, and politicians who chose to oppose the oppressions of the United States with words and ideas rather than violence.â€

“… This Indian Country brings to life people who drew on American ideas, emphasizing treaties and citizenship, to defend the tribalism and local control that American Indian policy attacked.”
-Richard White

“This Indian Country provides an invaluable exposition of the underrecognized political history of Native American intellectuals and activists. Judiciously framed and executed, it confirms Fred Hoxie’s standing as the leading proponent and practitioner of contemporary American Indian history.”
-Ned Blackhawk

PROFESSOR FREDERICK E. HOXIE
Fred Hoxie is the Swanlund Professor of History at the University of Illinois at Urbana-Champaign where he is also affiliated with the College of Law and the American Indian studies program. He has served as a consultant both to Indian tribes and government agencies, and his current research focuses on American Indian and indigenous political activism in the United States and beyond.

This event is made possible by the generous support of UCLA Office for Faculty Diversity.