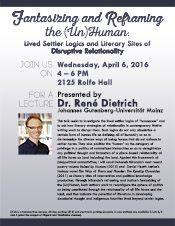 This talk seeks to investigate the lived settler logics of “humanness” and to ask how literary strategies of relationality in contemporary Native writing work to disrupt them. Such logics do not only absolutize a certain form of human life as defining all of humanity so as to de-humanize the diverse ways of being human that do not adhere to settler norms. They also position the “human” as the category of privilege in a politics of naturalized hierarchies so as to delegitimize any political thought and formation of a place-based relationality of all life forms on (and including) the land. Against this framework of (bio)political normativities, I will read Deborah Miranda’s most recent poetry volume Raised by Humans (2015) and Daniel Heath Justice’s fantasy novel The Way of Thorn and Thunder: The Kynship Chronicles (2011) as literary sites of intervention and political knowledge production. Through Miranda’s reframing and Justice’s fantasizing of the (Un)Human, both authors work to reconfigure the sphere of politics as being constituted through the relationality of all life forms and the land, and thus indicate the potential of literature in developing decolonial thought and Indigenous futurities lived beyond settler logics.