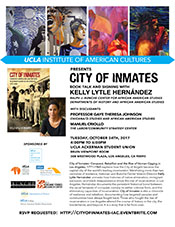 City of Inmates: Conquest, Rebellion and the Rise of Human Caging in Los Angeles, 1771-1965explains how the City of Angels became the capital city of the world’s leading incarcerator. Marshaling more than two centuries of evidence, historian and Bunche Center Interim Director Kelly Lytle Hernández unmasks how histories of native elimination, immigrant exclusion, and black disappearance drove the rise of incarceration in Los Angeles. Hernández documents the persistent historical bond between the racial fantasies of conquest, namely its settler colonial form, and the eliminatory capacities of incarceration. City of Inmates is also a chronicle of resilience and rebellion, documenting how targeted peoples and communities have always fought back. Those who fought the rise of incarceration in Los Angeles altered the course of history in the city, the borderlands, and beyond. It is a story that is far from over.

KELLY LYTLE HERNÁNDEZ is the Interim Director of the Ralph J. Bunche Center for African American Studies and Professor of History and African American Studies at UCLA. She is one of the nation’s leading historians of race, policing, immigration, and incarceration in the United States. Her award-winning book, ‘MIGRA! A History of the U.S. Border Patrol ‘(University of California Press, 2010), explored the making and meaning of the U.S. Border Patrol in the U.S.-Mexico borderlands, arguing that the century-long surge of U.S. immigration law enforcement in the U.S.-Mexico borderlands is a story of race in America. Her book, ‘City of Inmates: Conquest and the Rise of Human Caging in Los Angeles’ (University of North Carolina Press, 2017), is an unsettling tale that spans two centuries to unearth the long rise of incarceration as a social institution bent toward disappearing targeted populations from land, life, and society in the United States.