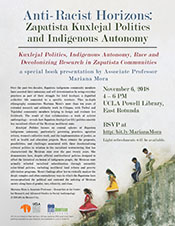 RSVP at http://bit.ly/MarianaMora Light Refreshments will be provided.

Over the past two decades, Zapatista indigenous community members have asserted their autonomy and self-determination by using everyday practices as part of their struggle for lekil kuxlejal, a dignified collective life connected to a specific territory. This in-depth ethnography summarizes Mariana Mora’s more than ten years of extended research and solidarity work in Chiapas, with Tseltal and Tojolabal community members helping to design and evaluate her fieldwork. The result of that collaboration—a work of activist anthropology—reveals how Zapatista kuxlejal (or life) politics unsettle key racialized effects of the Mexican neoliberal state.

Kuxlejal Politics focuses on central spheres of Zapatista indigenous autonomy, particularly governing practices, agrarian reform, women’s collective work, and the implementation of justice, as well as health and education projects. Mora situates the proposals, possibilities, and challenges associated with these decolonializing cultural politics in relation to the racialized restructuring that has characterized the Mexican state over the past twenty years. She demonstrates how, despite official multicultural policies designed to offset the historical exclusion of indigenous people, the Mexican state actually refueled racialized subordination through ostensibly color-blind policies, including neoliberal land reform and poverty alleviation programs. Mora’s findings allow her to critically analyze the deeply complex and often contradictory ways in which the Zapatistas have reconceptualized the political and contested the ordering of Mexican society along lines of gender, race, ethnicity, and class.

Mariana Mora is Associate Professor—Researcher at the Center for Research and Advanced Studies in Social Anthropology (CIESAS) in Mexico City. She holds a Ph.D. in Anthropology from the University of Texas at Austin and a M.A. in Latin American Studies from Stanford University. Her research focuses on struggles against the continued processes of colonization as part of state formation in Latin America, including in indigenous regions in Mexico; critical race and gender studies; decoloniality and the political; her recent work centers of race and human rights regimes as part of struggles for justice in cases of forced disappearance and territorial dispossession.