Skip to content
Home Events After the Genocide: Indigenous Struggles for Justice and the Impact of Court Trials in Guatemala

After the Genocide: Indigenous Struggles for Justice and the Impact of Court Trials in Guatemala 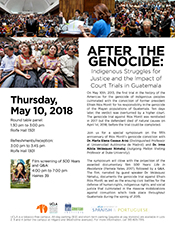 On May 10th, 2013, the first trial in the history of the Americas for the genocide of indigenous peoples culminated with the conviction of former president Efraín Ríos Montt for his responsibility in the genocide of the Mayan populations of Guatemala. Ten days later, the verdict was overturned by a higher court. The genocide trial against Ríos Montt was reinitiated in 2017 but the defendant died of natural causes on April 1st, 2018, before the trial could be completed.

What happens to justice when a genocide dies? How do indigenous claims about truth, justice, and reparations become reshaped after such an event? How can indigenous and non-indigenous scholars contribute to the defense of human rights and the struggles for justice in the Americas?

Please join us on the fifth anniversary of Ríos Montt’s genocide conviction to discuss these and other related questions with Dr. Marta Elena Casaus Arzú (Distinguished Professor at Universidad Autónoma de Madrid) and Dr. Irma Alicia Velásquez Nimatuj (outgoing Mellon Visiting Professor at Duke University). Dr. Casaus has published extensively on racism and discrimination against the Mayan peoples of Guatemala, while Dr. Velásquez Nimatuj has been at the forefront of struggles for the respect of indigenous cultures for decades. As well-known experts in the Guatemalan genocide, both our guest speakers participated as expert witnesses in the genocide trial against Efraín Ríos Montt (2013 and 2018) as well as in the “Sepur Zarco” trial for sexual violence and sexual slavery committed against Mayan women (2016).

The symposium will close with the projection of the awarded documentary film 500 Years: Life in Resistance (Pamela Yates, 2017), followed by a Q&A. The film, narrated by guest speaker Irma Alicia Velásquez Nimatuj, documents the genocide trial against Efraín Ríos Montt, as well as the ensuing civic battles for the defense of human rights, indigenous rights, and social justice that culminated in the massive mobilizations against corruption which took place throughout Guatemala during the spring of 2015.

This is an open and free event and refreshments will be served for the audience.

UCLA is a tobacco-free campus. All-day parking ($12) and short-term parking (payable at pay stations) are available in Lots 2, 3 and 4 (enter the campus at Hilgard and Westholme avenues). For more information, call 310-825-7315.