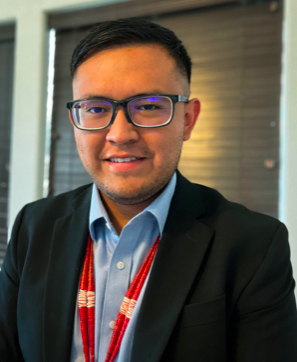 Jack M. Tome, Jr is Diné who was born and raised in Shiprock, New Mexico, where he currently resides. In 2019, Jack received his Bachelor’s degree in Political Science and American Studies from the University of New Mexico. Thereafter he moved to Los Angeles, California to attend UCLA and graduated with a master’s in American Indian Studies. His thesis, which he spent a great deal of time on is titled, “Changing Demographics on the Navajo Nation that Affect Views on the Gaming Industry: 1994-2004.” While attending UCLA, he was an active member of the American Indian Graduate Student Association and served as the Financial Director in 2020, After graduating from UCLA with a Master’s Degree, Jack moved back to Shiprock, New Mexico where he is currently working at Tse Bit Ai Middle School as a social studies teacher – the same middle school he attended from 2009-2011. Outside of the classroom, Jack enjoys watching movies at the theater, traveling, exercising, and playing video games.

Personal Quote:
” I am a proud alumnus of UCLA and hope to inspire more Navajo students from Shiprock to attend this beautiful institution.”